Shame on me for not blogging about PyCon Ireland this year, another success where I happily spent a big chunk of time greeting attendees at the registration desk and attended some interesting talks. 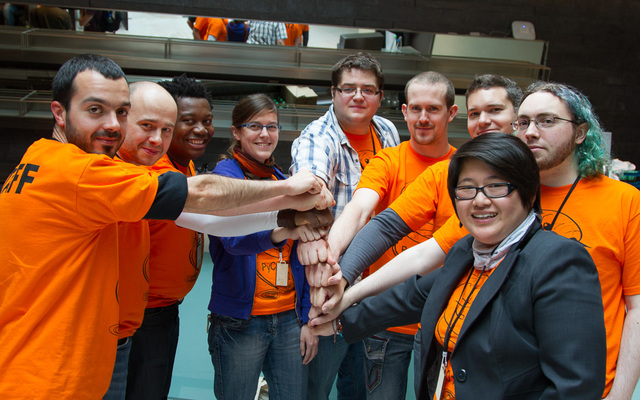 In the meantime, I took better notes at the November Python Ireland meet-up, where Ulrich took us through DevOps 101, going from the basics of what it is and all sort of related tools to help, mostly Python-based.

I thought interesting that Ulrich worked from a specific definition of DevOps that differs from the ones I heard. There was a time when I used to call myself "a devop" because in addition to development work I was also maintaining production and test servers and handling deployments, etc. However at the time I learnt from other sources that "a devop" was actually a system admin who also writes code to make their job easier... so I just stopped using the word ;) Ulrich based his talk on the premise  of development and operations working together.

Development tends to move fast while operations are more stable and conservative, why would you put these groups together?

The need to scale is an important one. You need the knowledge that the developers have of the application itself, but you also need to understand infrastructure. For instance if you deploy something and suddenly the number of requests spikes, you want devs and ops to be close together to solve the problem.

Following a "release early, release often" principle where you might deploy several times a day makes that collaboration important.

Environments are complicated and it's important for people to integrate ; if the departments remain separate people tend to stick only with the same group of people.

Devops enable better communication and understanding. Developers can move fast and deploy faster as they know what ops need. This also helps mitigate risk thanks to the regular deployments: fewer changes are deployed at once (helpful to determine what breaks) and it becomes easier to do.

The talk then moved on to tools, including advice on how to create a simple django app to keep track of which versions of software are deployed where -- very simple and yet usually enough.

Some of the projects that were mentioned:

Ulrich then went through some of Martin Fowler's principles for refactoring among other things, and also talked about Jenkins, not Python but known as the "Wordpress of Continuous Integration" because it has so many plugins. Sonar can be used for code quality.

We tried something different for the second part of the evening and watched a video of a Pyramid talk. I don't think it quite worked, even at 30 minutes it felt too long. Perhaps we should try again with a video more likely to appeal to a wider range of people, or simply shorter talks. Fair play to Diarmuid for standing up and taking the heat of answering questions afterwards ;)