After a few months of owning a N900 finally came the itch to write an app for it -- using of course Python! The Maemo documentation is excellent, I'm only putting my notes down here for future reference.

First off, making sure to know which version of Maemo is on the phone: Settings -> About: Maemo 5.

The documentation at http://maemo.org/development/ is truly excellent. Of interest to us to begin with is installing the SDK. The wiki has been kept up to date with tips and links to solutions of potential problems at the stage where you might encounter them, making any issue a non-event.

Note: It turns out that the SDK is optional to develop with Python. If you would prefer not to set this all up, you can simply move your Python files to the phone or write the code there directly. Personally I found having a full SDK on the laptop to be really handy to try things out quickly, and to tweak and understand what the final result will look like.

Getting started, every time

The SDK docs lists the various commands that may work for your distro and system specifics, which is awesome but can be a bit dense to read through and find again later on. Here's what I do on Debian unstable:

Important: Don't forget to run `af-sb-init.sh stop` at the end, or say, if you messed your Xephyr command and need to restart it -- you will need to stop this script before attempting to start the emulator environment again. Otherwise there will be D-Bus conflicts and things won't work.

After setting up the SDK, the documentation recommends you go learn about packaging next -- I kept that one for later, it's more interesting to build something first!

By following the documentation you can find the Hello world for Python, which does work on the phone with no hassle and without stopping by the SDK: Developer Guide -> Programming Environments -> PyMaemo quick start.

If you'd like to work in scratchbox (quicker turnaround!), you can go back to the Maemo SDK on your machine and follow again the instructions to set up a Python development environment.

The same Python-related packages need to be installed into the dev environment, within scratchbox.

Make sure you're calling `python2.5` explicitly or the program will fail with "ImportError: No module named gtk". While working with Hildon I use this command instead, which you'll learn when doing the UI Tutorial.

Because of the various warnings messing up my scratchbox screen, I ended up using emacs from outside of scratchbox. The files you're working with are located at /scratchbox/users/<username>/home/<username>.

Once you can run the Hello world program, the next step is to go through the handy UI tutorial, which teaches a lot about Hildon and GTK.

I would also recommend installing the devhelp packages for:

I'm really happy with that setup, and it's lovely to get a nice looking UI working so quickly and easily. This is reconciling me with GUI programming -- it looks nice and because of the small screen, there isn't a ton of repetitive boilerplate to write. I can't wait to be far along enough in that project, that I have an excuse to learn again about Debian packaging! :-) 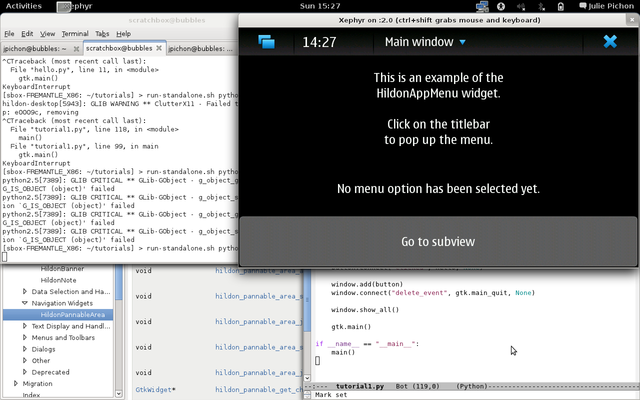